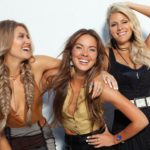 Blue Roses is the debut album of American country music group Runaway June. It was released June 28, 2019 via Wheelhouse. “Buy My Own Drinks” was released as its debut single in August 2018 and reached the top 20 of the Billboard Country Airplay charts, making it the first time a female group or trio had done so in 14 years.

Blue Roses was preceded by the release of three singles, though only “Buy My Own Drinks” ultimately made the tracklisting for the album. Three other songs originally featured on their self-titled EP were also reprised on the album, including a cover of Dwight Yoakam’s “Fast as You.” Of the 10 tracks on the album, members of Runaway June have writing credits on six, and it was produced by Dann Huff.

The group promoted the album as a supporting act for Carrie Underwood on her Cry Pretty Tour 360, which began on May 1, 2019, alongside Maddie & Tae.

More Albums From This label:
Wheelhouse