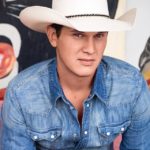 In late 2018 after wrapping up a summer tour with Luke Bryan Pardi had announced he was taking his time on releasing new music but to expect new music from him in the new year. At the time he hinted a song written and would hopefully feature fellow country star Miranda Lambert

One day after appearing on the 2019 season final of American Idol, Pardi announced the album. Its lead single, the title track, was released May 20, 2019. The album also includes the singles Pardi issueed before the album’s release—”Ain’t Always the Cowboy”, “Me and Jack” and “Tequila Little Time”.

Before the album’s release, Pardi stated he named the album Heartache Medication because the album contains sad topics intended to make the listener feel good at the same time.[