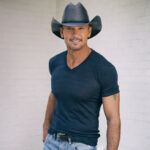 Here on Earth is the fifteenth solo studio album and sixteenth overall by American country music singer Tim McGraw. It was released on August 21, 2020, by Big Machine Records. It is McGraw’s first album since rejoining Big Machine. The album was produced by McGraw and Byron Gallimore. The release was preceded by the release of “I Called Mama”.

Following the release of his 2015 album, Damn Country Music, McGraw’s contract with Big Machine Records expired. McGraw and his wife Faith Hill signed a deal with Sony Music Nashville’s parent company Sony Music Entertainment in February 2017. This deal saw the release of McGraw and Hill’s first duet album, The Rest of Our Life, in November 2017, on Sony’s Arista Nashville imprint. Two solo singles followed, 2018’s “Neon Church” and 2019’s “Thought About You”, both released on Sony’s Columbia Nashville imprint. McGraw returned to Big Machine Records in February 2020, following his departure from Sony earlier in the year.