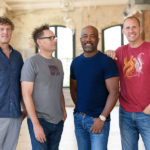 The album was announced in December 2018, along with their Group Therapy Tour, the first outing the band had made since 2008. Once the group decided to reform, they went to vocalist Darius Rucker’s management company to help them arrange for recording and promotion. The band members decided to record again concurrent with the decision to tour and used the opportunity to debut new tracks live. This release is the first from the band in 14 years and the title was announced on August 9, 2019.

To promote the album, the single “Rollin'” was made available with pre-orders on their site and to the general public on September 6. The band enlisted Frank Rogers and Jeff Trott to record them, along with a variety of guest musicians. Individual band members brought in songs that they had considered for solo efforts (guitarist Mark Bryan, with “Turn It Up”) or that resulted from jam sessions (singer Darius Rucker with pop musician Ed Sheeran on “Wildfire Love”), finally arriving at 17 tracks recorded in the studio. The band worked with outside songwriters for this recording, admonishing them, “We don’t want you to write the Hootie song… Write a song and we’ll make it sound like Hootie.”

The band released the track listing and lead single “Rollin’” on September 5. “Miss California” and “Lonely on a Saturday Night” followed, with “Hold On” coming out on October 18. Some sources indicated that the song “Unafraid” would be on the final release but it was cut.

If It Wasn’t for You

Cowboy’s Back In Town