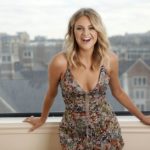 Ballerini announced via Instagram in July 2019 that her third album was complete. The album title and its release date were revealed on January 20, 2020. The album’s tracklist was revealed on February 27, 2020.

Ballerini wrote or co-wrote all 13 tracks on the album. Two tracks have credited guest vocalists: “The Other Girl” is a duet with Halsey and “Half of My Hometown” features harmony vocals from Kenny Chesney.