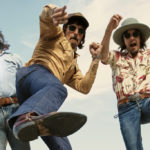 Let It Roll is the second studio album by American country music group Midland. It was released on August 23, 2019 via Big Machine Records.Midland released the album’s lead single “Mr. Lonely” in February 2019. As with their previous album On the Rocks, the project was produced by Dann Huff, Shane McAnally, and Josh Osborne. In support of the album, the band began the Let It Roll Tour in June 2019.