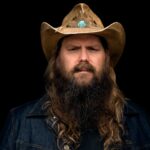 Starting Over is the fourth studio album by country music singer Chris Stapleton. The album was released on November 13, 2020, by Mercury Nashville.

Love, Heartbreak, & Everything in Between