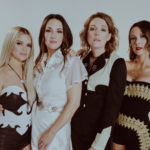 The Highwomen is the eponymous debut studio album by country music supergroup the Highwomen, made up of band members Brandi Carlile, Natalie Hemby, Maren Morris, and Amanda Shires. It was released on September 6, 2019, by Elektra Records.

In 2016, when Shires was finishing her record, My Piece of Land, in music producer Dave Cobb’s studio, Shires had an idea to create a female country supergroup in homage to the legendary Highwaymen (consisting of Johnny Cash, Waylon Jennings, Kris Kristofferson and Willie Nelson). At the same time, the lack of representation of female artists on country radio and at country music festivals had been publicly discussed by many journalists like Marissa Moss. While on tour in her van, Shires kept a running list of artists while listening to country radio, and noticed that there were very few women. When she called to request they play more female artists, she was directed to a Facebook page lottery system. Cobb recommended Shires call Carlile, who she didn’t know. Carlile thought it would be fun, and would be an interesting creative project.

The Highwomen project was widely hinted at by Carlile, Morris and Shires before it was officially announced on April 6, 2019. The Highwomen had originally intended to leave the fourth spot in their line-up vacant to allow other female collaborators to join them, with Chely Wright, Courtney Marie Andrews, Margo Price, Janelle Monae, and Sheryl Crow mentioned as potential guests. The band, who jokingly refer to the collaboration as a pirate ship experience, said that they see the project as an incubator project that highlights mentorship and support of fellow women artists.

The group made their live debut on April 1, 2019, at Loretta Lynn’s 87th birthday concert held at the Bridgestone Arena in Nashville. There, Natalie Hemby was officially revealed as the final member and the quartet performed “It Wasn’t God Who Made Honky Tonk Angels”.