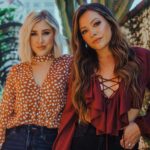 The Way It Feels -

After releasing their debut album in 2015 with Dot Records, the label announced that they would be shutting down in early 2017. At the time, the duo had already begun working on their second album.

In June 2017, the duo announced that they had signed with Universal Music Group under their Mercury Nashville imprint. Marlow revealed that they “started fresh” and got to work writing new songs for their sophomore record. By the summer of 2018, the duo revealed that the album had been completed and was awaiting a release date, though “Bathroom Floor” was a track that ended up being added to the album in 2019.

Prior to the release of their second album, the duo released two five-track EPs: One Heart to Another in April 2019 and Everywhere I’m Goin’ in October 2019. All ten tracks appear on The Way It Feels.