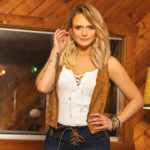 Lambert announced that the lead-off single from her upcoming seventh studio album will be “It All Comes Out in the Wash,” which was released on July 18, 2019. The song was co-written by Lambert with Hillary Lindsey, Lori McKenna, and Liz Rose (“Love Junkies”) and produced by Jay Joyce, marking the first time she had worked with the producer. The song was released alongside “Locomotive,” another track intended for the upcoming album that she had previously debuted on the CMA Music Festival in June 2019. Two other tracks—”Mess with My Head” and “Bluebird”—were also previewed ahead of the album in August 2019.

Lambert’s seventh studio album, Wildcard, will be released on November 1, 2019.