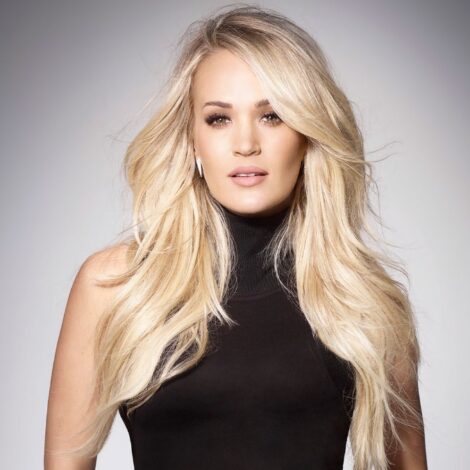 Carrie Underwood emerged from the promise of her 2005 American Idol win to become a true multi-format, multi-media superstar, spanning achievements in music, television, film, and now books, as a New York Times bestselling author.  All seven of her albums, including  her Greatest Hits album, have been certified platinum or multi-platinum, and she has sold more than 64 million records worldwide.  She has also recorded 27 #1 singles, 14 of which she co-wrote. She released her sixth studio album in 2018, Cry Pretty, marking the first time she has co-produced her own album.  Cry Pretty has been certified Platinum by the RIAA, becoming her seventh Platinum or multi-Platinum album, including her Greatest Hits: Decade #1.  The critically-acclaimed album debuted at #1 on the Billboard 200 chart, cementing her place in history as the only woman to land four country albums at the top of the all-genre chart.  The album was the best-selling all-genre female debut in 2018 and she continues to hold the record as RIAA’s #1 certified female artist for Digital Singles.  Five singles from Cry Pretty have been certified by the RIAA, including the Platinum-certified “The Champion,” and the Gold-certified “Cry Pretty,” “Love Wins,” “Southbound,” and “Drinking Alone.” Additionally, the title track and lead single, co-written and co-produced by Carrie, topped the iTunes Top Songs charts in 12 countries.

This Fall, Carrie will release her much-anticipated, first-ever Christmas album, My Gift.  The album will feature a combination of beloved traditional favorites celebrating her faith and the spiritual nature of the holiday, as well as original material.

In 2019, Carrie celebrated her 11th anniversary as a proud member of the Grand Ole Opry. She also packed arenas across North America with The Cry Pretty Tour 360, featuring an all-female line-up with Maddie & Tae and Runaway June, with sold-out shows including New York’s Madison Square Garden, Nashville’s Bridgestone Arena, and L.A.’s Staples Center.

Underwood has won over 100 major awards including 7 GRAMMY® Awards, 14 ACM Awards including 2 for Entertainer of the Year (the first female in history to win twice), 20 CMT Awards where she holds the record for the most award wins ever for the show, 7 CMA Awards, and 15 American Music Awards with her 7th win for Favorite Female Artist – Country and 6th win for Favorite Country Album for Cry Pretty, breaking the AMA record for Most Wins in the Favorite Country Album Category.

On March 3, 2020, HarperCollins/Dey Street books published Carrie’s first book, FIND YOUR PATH: Honor Your Body, Fuel Your Soul, and Get Strong with the Fit52 Life, a fitness lifestyle book in which she shares her belief that fitness is a lifelong journey, providing a common-sense approach to staying active, eating well, and looking as beautiful as you feel, 52 weeks a year.  The book became an instant national bestseller, not only on the prestigious New York Times list, but also hitting #1 on Amazon and #1 on Publisher’s Weekly’s Bestseller lists, Wall Street Journal’s #1 bestselling nonfiction book and debuting at #4 on USA Today’s Bestselling Books list during its first week of publication.  The same week, Carrie launched her new fitness app, fit52, which is a holistic wellness platform designed to encourage and support users on their personal wellness journey, and is now available on  the App Store and on Google Play.  She is founder and lead designer for her fitness and lifestyle brand, CALIA by Carrie Underwood, which launched in 2015 and is exclusively available at DICK’S Sporting Goods nationwide and online at www.calia.com.