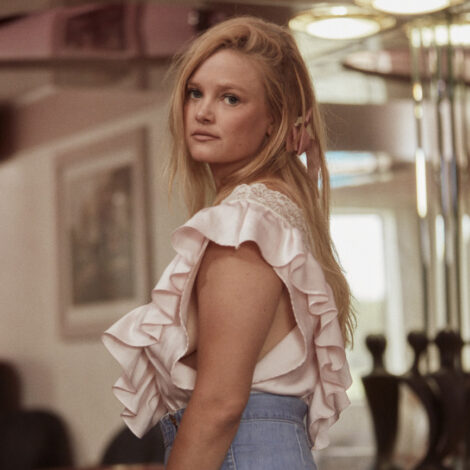 The idea of “home” courses throughout country music. But few songwriters can place you in the center of the town square, on a stool at the corner bar, or in a chair at the kitchen table quite like Hailey Whitters.

On her 2020 breakthrough album The Dream, the singer-songwriter wrote about escaping her hometown of Shueyville, Iowa, to pursue stardom in Nashville. It was a fantasy record at first, full of far-off plans, hopes, and dreams. But it soon became Hailey’s reality — she signed a label deal with Big Loud/Songs & Daughters, went on tour with Luke Combs and Midland, and made her first of many appearances on the Grand Ole Opry.

The Dream and its deluxe reissue Living the Dream earned critical acclaim from The Washington Post, Rolling Stone, Garden & Gun, and Stereogum, and Hailey racked up 75 million global artist streams. She also became a Grammy-nominated songwriter for “A Beautiful Noise,” her collaboration with Brandi Carlile, Alicia Keys, and Brandy Clark.

In the midst of that whirlwind, Hailey found herself reconnecting with her Midwestern roots. Shueyville was always in the back of her mind and the memories she made there — getting her first kiss; partying in the cornfields; gathering for Sunday supper — started to shape her writing. Over the past two years, she channeled those memories into her new album, Raised.

Released via Songs & Daughters and Hailey’s own Pigasus Records, Raised is the sound of Hailey Whitters going home.

“It’s been 14 years since I’ve lived in Iowa, but more and more I’ve been going back there mentally and being pulled to the people and the places that raised me,” she says. “With The Dream, I was starting to turn that corner back home, but this record went straight there. If The Dream were my wings, then Raised is my roots.”

Hailey reunited with producer Jake Gear and engineer Logan Matheny for Raised and also joined Gear as co-producer. The result is an LP that is rich in folksy turns of phrase, sharp yet inventive in its musicianship, and teeming with unvarnished honesty.

“If you’re listening to The Dream, I think you hear a girl hanging on. She’s had her heart broken, but she’s finding a way to persevere and to keep going,” Hailey says. “And when you listen to Raised, you hear what gave her that strength.”

Made up of 17 tracks, Raised is full of expertly crafted country songs and quirky sonic excursions. The orchestral piece “Ad Astra Per Alas Porci” (Latin for “To the stars on the wings of a pig,” Hailey’s motto) bookends the album. There’s also a piano “Interlude” at the record’s midsection and a skit titled “The Grassman” that introduces the song “Our Grass Is Legal,” a salute to a straight-and-narrow family business that was accustomed to shady phone calls.

Family is a recurring theme throughout Raised. She sings about “bunk beds, matchin’ sheets and sharin’ the bathroom sink” in “Big Family” and reminisces about life events in “In a Field Somewhere.” On the surface, she sings about drinking in “Beer Tastes Better,” co-written with Lori McKenna. But it’s really a commentary about outgrowing home and trying in vain to recreate that sense of community.

“It’s that bittersweet experience of walking back into your hometown bar,” she says. “It’s like everything’s changed, but nothing really has.”

Along with standouts like “Ten Year Town” and “Heartland,” The Dream gave Hailey a viral hit with “Janice at the Hotel Bar.” She delivers another superb character study on Raised with “Pretty Boy.” “That song unveils some of the darker sides and shadows of masculinity,” she says. “Where I’ve grown up, boys are supposed to be tough, aren’t supposed to cry. But as I’ve gotten older, I’ve realized that a man’s ability to show emotion, grief and sadness is a strength.”

Like Hailey herself, Raised is steeped in the culture of the Midwest. Musically, there are hints of early Alan Jackson, the Chicks and the king of heartland rock, John Mellencamp. But you needn’t have spent your formative years on a farm for Raised to speak to you.

“Raised is a celebration of the Midwest, but I think it’s a common story no matter where you’re from,” Hailey says. “My experience growing up in the middle of the country is very relatable to a lot of people. We’ve all lived in a similar way — the only thing that’s different is the scenery.”