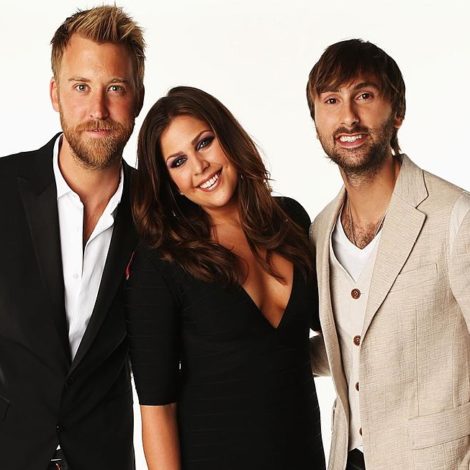 For a band like Lady Antebellum – the multi-Platinum, seven-time Grammy winning country trio of Dave Haywood, Charles Kelley, and Hillary Scott – the metaphor of life as an ocean comes natural.

After more than a decade in the spotlight, they’ve ridden its waves and weathered its storms, learning just how easily it can swallow you up. But between “Need You Now” (a 9X-Platinum record setter), starting families and exploring their own uncharted musical territory, they’ve also discovered another, more beautiful side to the squalls and swells. Now with their seventh studio album, the group embraces everything the OCEAN of life has to offer.

“OCEAN is all of the things that we think and feel when we hear the word,” says Scott. “This album is immersed in life stories about barely keeping your head above water all the way to those times that make you feel like everything is smooth sailing.”

Produced by first-time collaborator Dann Huff, OCEAN is Lady Antebellum’s debut on BMLG Records, a new beginning that helped address the expansive OCEAN concept. Rooted in the organic, elemental compounds which began their journey, rich harmonies are informed by everything from ‘70s rock to Southern gospel, interwoven with plush country instrumentation and applied to vulnerable, eternal themes of the heart … like the ocean itself, constant but always changing.

It’s not really a throwback album for the trio with over 18 million album units and 34 million tracks sold, four billion streams and nine Billboard No. One hits – there’s simply too much personal growth for that to be the case. But it does mark a special moment for the band, relaunched and refocused.

“There’s this theme of returning to the core of who we are—as writers, vocalists and people—that came out in each of these songs,” Dave Haywood agrees. “Our time in the studio with Dann had an excitement that felt like we were making our first album all over again.”

That excitement almost leaps from the speakers in tracks like the fiddle-assisted “Crazy Love” and big-picture anthem, “Alright.” But the maturity that comes with 13 years together is ever present, giving added heft to songs like the longing first single “What If I Never Get Over You,” hopeful “Let It Be Love” and grooving, less-is-more romance of “Mansion.”

“As artists, it’s partly our job to sing,or to say, the things that everybody thinks and maybe doesn’t say out loud,” says Scott. “I think there’s a lot of vulnerability in that.” True to that ideal, the swaying “Pictures” (co-written with Sarah Buxton and Corey Crowder) measures the gap between a couple’s surface and deepest truth – often obscured by perfectly-filtered social media presentations. “The music feels light and fun,” says Haywood, “but the song is actually pretty heavy.”

“Be Patient With My Love” (which Kelley wrote with Dave Barnes and Ben West) is a beautiful ode to commitment that, in the tradition of great ballads, balances big feelings with emotive guitars. “It’s very much autobiographical for me,” says Kelley. “I can be a lot to handle at times, so my wife has to put up with the ups and downs. We’ve just never given up.” The song serves as one of the first songs written for the project as its restorative lyrics fit lockstep with the thoughtful OCEAN vibe. “Charles wrote ‘Be Patient With My Love’ so many years ago, and it’s still so perfect for this album,” Scott explains. “I think we can all relate, if we’re willing to get honest enough with ourselves. That’s one of the reasons that I’m so proud of this album. We’re challenging ourselves to be better humans, all around.”

Likewise, “What I’m Leaving For” (written by Sam Ellis, Micah Premnath and Laura Veltz) chronicles the pain of having a physical ocean between the band and their loved ones. Arriving on the heels of their first-ever OUR KIND OF VEGAS residency and multiple national and overseas headlining runs, it’s a touching portrait of people who support their families by being apart from them – as the group’s three members have often done. “I wore that demo out so much,” recalls Haywood. “It’s hard stepping away from your family the way we do, and [that song is] such a great, beautiful way of articulating what we’re out here doing this for – our families, and those that we love and the fans that love us, too. That song is a beautiful picture of our journey.”

As Scott points out, it also speaks to the lives of fans, too: “As a mama, I thought about all of my friends who just had babies and are coming back from maternity leave,” she says. “Or all those different times when you’re tender-hearted because it’s just hard to leave, whether you’re gone for a few hours or for a few weeks.”

On the swirling “The Thing That Wrecks You, the trio teams with fellow country superstars Little Big Town for a true duet; its dreamy coda featuring the two groups’ vocals intermingling, weaving in and out of one another and occasionally hovering over gauzy guitars. “We thought, ‘If we’re going to do something, let’s get as artistic on this as we can,” says Kelley, explaining the thinking behind the track’s stunning, seven-part harmony. “Getting to work out the parts with them in the room was really cool – to see their process, how they divvy up their responsibilities. It just came together pretty great. It’s definitely one of my favorites off the record.”

While OCEAN is full of deeply emotional moments, Lady A lets loose, too. “You Can Do You” is a swaying live-and-let-live anthem inspired by the camaraderie found in Nashville’s crowded honky tonks, while “Boots” combines heartland-rock crunch with Celtic fiddles. But the project closes with its title track, a piano-backed showcase for Scott’s raw, unadorned vocal that lands like a tidal wave, leaving its mark on everything that came before.

“It’s such a cinematic and theatrical melody that became the cornerstone of this record for us,” says Scott, who recorded the bulk of the song’s vocal in a single, tear-filled take. “That was one of the most creatively uncomfortable days of my life.”

“The message of that song, it just resonates,” Scott adds. “I wish we could all see ourselves the way the person who loves us sees us – imperfections, flaws and all. … With all humility, I’m proud that I pushed through the fear – it’s probably one of my favorite things that I’ve ever done musically.”