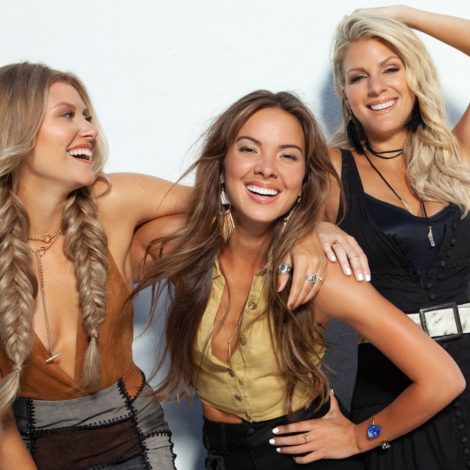 It’s that sound. You know it – the unmistakable sound of three voices in harmony, a harmony that rings back to the early days of Country music, of singing on a porch on a summer’s day, of singing just for the joy of it. That’s the sound of Naomi Cooke, Hannah Mulholland, and Jennifer Wayne – a.k.a. critically-acclaimed Country trio, Runaway June.

That sound is at the core of every song on their debut album, Blue Roses (out June 28 via Wheelhouse Records) – especially the hauntingly personal title track. “We all love Bluegrass and traditional Country music. That’s been all of our hearts,” says Jennifer. “It’s what we love singing every single night, and it’s the backbone to all of our songs.” With the sparest of instrumentation and the gloriously rich three-part vocal line that put Runaway June on the map, “Blue Roses” may be a meditation on mortality – but sonically, it stands as a proud mission statement for this band as their first full-length record finally makes its way into the world.

Produced by Dann Huff and Ross Copperman, the album is comprised of six new tracks that join four songs from their self-titled EP (including one barn-burning cover of Dwight Yoakam’s “Fast As You” that’s become a live favorite), Blue Roses demonstrates, as Naomi puts it, “all the sides of who we are. It’s an album with many different faces.” Whether it’s the bold kiss-off of an opener, “Head Over Heels” or the pain-soaked regret of “Got Me Where I Want You,” the songs share one defining non-musical component as well: an intense, lived-in honesty from three women who’ve earned their scars as well as their victories. “We want to touch people and make them feel like they’re not alone— to be as honest and authentic as possible so we can find the people who relate to us,” explains Hannah. “Every song has to resonate as true.”

It seems like such a simple – and, yes, honest – dream: to raise voices in song and solidarity for an audience who wants to listen. But nothing about the story of Runaway June has been simple. Blue Roses is a debut album – but it’s a debut that’s four years in the making, four long, hard years down a road filled with love and loss, of three women leaving life and family behind to follow inspiration, knowing the music they were playing was connecting because they saw it in the crowd night after night, and yet struggling on the slippery slope of a genre in transition. “It took a long time to get going,” admits Hannah. “We really formed as a band on the road, so I feel like through that journey we were able to learn more about ourselves as people – as women, as performers, as artists – and figure out what we wanted to say.”

Four years ago, the three women were solo singer-songwriters, connected via the small-town network of Nashville’s Music Row. “Labels were not signing solo female artists at the time, and it was really daunting and discouraging,” remembers Naomi. Fate soon found the trio in a writing room together, and the songs just flowed. When BBR Music Group heard their music, they were quickly added to its newest imprint, Wheelhouse Records, and Runaway June was born.

The early buzz burned bright. “Once we got together, it felt like everything happened overnight, and all of a sudden we’re on planes every single day,” Hannah recalls with a laugh. Despite scoring the first Mediabase Top 25 single for a female trio in over a decade with “Lipstick” in 2017, the band still had a long road ahead.

“So many things have to align for someone to succeed in the music business,” says Hannah. “You’re just faced with challenge after challenge that are totally out of your control. We used to get so caught up in worrying about all those things that we can’t change, but we’ve learned that all we can do is show up and do our job the best we can, and just hope we can keep going.”

Their persistence paid off, and change was on the horizon. “Buy My Own Drinks,” from their 2018 self-titled EP, cracked the Top 20 – a monumental accomplishment on multiple levels breaking a 14-year drought in that space for female groups– and they received back to back ACM nomination for 2018 and 2019 New Vocal Duo or Group of the Year as well as a CMT Award nomination. Most importantly, says Jennifer, they never forgot where the dream started.

With a slot opening for Carrie Underwood on her 2019 Cry Pretty tour, more people are discovering their music than ever. The tour – where they share a bill with Underwood as well as fellow female upstarts Maddie & Tae. The trio is also quick to shoot down any claims that the tour is a gimmick or marketing stunt. “Carrie bringing us on tour – she didn’t book an all-female tour because we’re women,” replies Naomi. “She booked it because women in Country are talented, strong, entertaining, smart, and hardworking, and we were the best acts to put on her kick-ass tour.”

That’s the kind of confidence that comes from four years of persistence, of love and loss, of challenges ands hard choices and inspiration. Now, Naomi, Hannah, and Jennifer find themselves at the beginning of a new chapter, armed with songs they believe in, a live show that scores standing ovations, and the wisdom they’ve earned along the way to both. Most importantly, they know it’s the power of their three voices in harmony – both literally and metaphorically – that has gotten them here, and they know that’s the power that will take them down the next stretch of their journey. “For Runaway June to survive, we had to figure out what works for us, and really, really rely on that,” says Naomi. “We’re like an unbreakable little fortress.”

“Either you jump in, or you jump off,” shrugs Jennifer. “We made a choice to just go for it and trust in the beginning, but now we have earned real love and respect for each other as well. We’re basically married-times-three,” she laughs, and the other two women join in, voices in harmony once more.