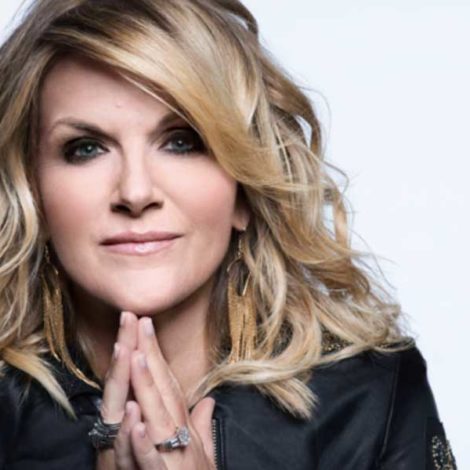 When you find your purpose, you just know it.

As such, Trisha Yearwood considers music to be “more like a calling than a choice.” That becomes instantly apparent on her 2019 solo album, Every Girl. The award-winning singer, artist, and performer approaches these fourteen songs with the same freedom and fire first ignited at the dawn of her storied career, yet further fueled by a few years of well-earned wisdom.

“I approached this album without any pressure or expectations,” she affirms. “You want people to recognize you as an artist, but you also want to take them somewhere they haven’t necessarily been with you before. With the freedom of no expectations, I got back to that feeling I felt on my first album, like I have to do this and put it out there. Over the years, I let go of worrying about perfection. I just wanted to have a good time. I realized maybe that’s when you do your best work.”

The record came to life during a prolific period for Trisha. She initially entered the studio with longtime producer and collaborator Garth Fundis during May 2018 before spending June in Los Angeles recording the Frank Sinatra homage Let’s Be Frank at the world-famous Capitol Records studio. Upon finishing the covers collection, she returned to Nashville and spent the remainder of the year working on what would become Every Girl alongside Fundis.

The album marked an important milestone. Other than the holiday duet album Christmas Together with husband Garth Brooks, Every Girl closed a 12-year gap since the release of her last original solo record, Heaven, Heartache and the Power of Love, in 2007. In between, she launched the EMMY® Award-winning Food Network smash Trisha’s Southern Kitchen, moved back to Music City, and joined Garth on a marathon three-year world tour.

“Right before I started the cooking show eight years ago, my mom passed away,” she recalls. “The show was like therapy, especially because my mom and dad were really good cooks. Cooking those recipes and telling our stories helped my sister Beth and I keep their memories alive. Then, I went on 400 shows with Garth. In order to do this right, I needed to be in a space where I could just breathe and listen to songs. One day, I looked up and thought, ‘I didn’t mean for eleven years to pass. As much as I love all of these other things I’m doing, music feeds my soul. I have to do this for me’. Making both records was so gratifying. It reminded me that I don’t want to ever let that much time pass again before I make more music.”

Abetted by this perspective and time, she dove into assembling Every Girl. The introductory single and title track, “Every Girl In This Town,” set the tone for the record. Pairing delicate clean guitar with Trisha’s dynamic delivery, it crescendos toward a vibrant and vivid refrain as it transmits an empowering reminder.

The opener “Workin’ On Whiskey” sips away sorrows under the drone of an electric guitar and a confessional chorus detailing, “a situation you want to change, but can’t,” as she explains. Showcasing her powerhouse vocals, she tackles “Home,” which was written by iconic songwriter Karla Bonoff and popularized by Bonnie Raitt in 1977.

“It was really amazing to do,” smiles Trisha. “Karla suggested ‘Home.’ Her version is one I’ve been singing since I was 15-years-old. I grew up on this. Now, I get excited I have Karla’s email,” she laughs.

She teams up with Kelly Clarkson on the “the very vulnerable and personal” ballad “Tell Me Something I Don’t Know.” Above sweeping keys, Trisha’s voice takes flight complemented by Kelly’s towering range before a soaring guitar solo. Meanwhile, she features Garth on “What Gave Me Away,” which captures “a sultry vibe.”

“I can’t imagine anyone else singing on that except for him,” she smiles.

Elsewhere, the stark and simple storytelling of “Bible And A .44” nods to classic country as Trisha dedicates the tune to the memory of her father. Between sparse piano chords, Don Henley joins her for a powerful final word on the conclusion “Love You Anyway,” reuniting the friends who have been collaborating since their 1992 Hearts In Armor standout “Walkaway Joe.”

“It harks back to the album Hearts In Armor,” she says. “It has to be a really special song for me to call Henley, and it is.”

Throughout the past three decades, Trisha has garnered numerous GRAMMY®, CMA®, and ACM® Awards, achieved countless multi-platinum certifications, and entertained millions of fans. The singer, actress, author, chef and entrepreneur permeates multiple facets of culture as well. Beyond twelve studio albums, she hosts the EMMY® Award-winning Food Network hit Trisha’s Southern Kitchen and her Facebook Live “pre-show,” T’s Coffee Talk. At the forefront of a veritable lifestyle empire, she penned three New York Times-bestselling cookbooks and has designed cookware, furniture, home accessories, and area rugs. Trisha has also collaborated with Williams-Sonoma on her signature best-selling cocktail mixes like “Summer in a Cup,” “Autumn in a Cup,” and “Christmas in a Cup” as well as a variety of food products ranging from a signature biscuit mix to a complete Thanksgiving Dinner.

Through fulfilling her calling again on Every Girl, Trisha’s voice resounds and resonates louder than ever.

“I’d love for people to be as moved by the songs as I was when I recorded them,” she says. “I’ve never experienced more joy in the studio. This is what I believe I was born to do. In my career, I’ve never once said or felt like, ‘I don’t want to sing tonight.’ When you’re given a gift from God and you get the opportunity to use it for a living, it’s the greatest match. I’m not sure what I’d be doing without music. I’m so grateful to be here.”